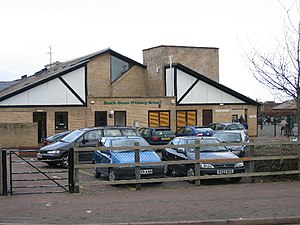 The Government drive to get rid of the Local Education Authority has bee spearheaded by the potential for schools to take on Academy status and run their own affairs, develop their own curriculum, with the sweetener of getting a whole bucketful of cash and spending it how they see fit has proven a huge draw for many schools, including local ones in Gloucester and Quedgeley.  However, there are many fears that are coming to light, fears that have been suppressed in secrecy about just how much risk our schools are shouldering, and just how much protection parents and communities have.  Not least of all is if you treat the school like a business, are the Teaching staff able to cope with teaching (when we already know they are overworked) and then adding the business on top of that.

The Government is laughing now as there are many things like the Pension deficit of teachers is now not a problem as the schools have to take that on, any incidents involving our children which normally would normally be handled by the Local Authority, but not now, it will all be down to the school.

When I first heard about these, I could not really take much of it in, especially as no governors would confirm, they just said they could not talk about it.  But then I have now seen a letter from the unions to Chair of Governors which has really got me concerned.

This letter was sent last month, but has now come into the public domain, see below for the highlights (follow this link for the whole letter):

Should Your School Become An Academy?

We are writing to you as a Chair of Governors in an English primary school because we know that there is a lot of discussion at the moment about the possibility of schools applying for academy status.

All the major unions representing classroom teachers and school support staff believe academy schools are detrimental to education and are extremely concerned that the spread of academy status to the point where local authorities are undermined will be problematic, not only for staff, but also for governors, parents and communities. This letter details some of the reasons why we think your school should not pursue academy status.

The Government has characterised the adoption of academy status as escaping from the control of a local authority. In truth, the local authority has very little control over what schools do, but its primary purpose is to act as a safety net when there are problems and to be a provider of services that are not easy to obtain anywhere else.

Listed below are only some of the services currently provided by local authorities that any school becoming an academy would have to fund and organise for itself, with all of the added work, difficulties and risks involved:

Academies are funded on a similar basis to local authority maintained schools, with the exception that they receive an amount of money in return for no longer automatically receiving various services from the local authority. The Government has stated that “becoming an academy should not bring about a financial advantage”. Many of the services that schools receive from the local authority are either difficult to obtain elsewhere, are more expensive, or are provided by smaller organisations and are accordingly of uncertain quality. It is clear that schools cannot expect to organise all of these things independently. As a result of their smaller size, primary schools will have to pay proportionately more for any service that they have to buy than secondary schools. Furthermore, academy schools will not benefit from various financial levers that local authorities have, including economies of scale, long-established relations with suppliers or the expertise that the local authority currently uses in order to reduce costs.

There are reports that some headteachers have more money as a result of becoming an academy, due to receiving an amount in respect of local authority central services. These claims must be treated with a large degree of scepticism. Academies still need to pay for those services. There may have been anomalies with the funding of some of the early academies, but it is clear that, like schools, academies will be hit by the Government’s cuts. Academy funding is based on the funding levels of maintained schools in the area, plus an element to reflect local authority central spending. Real-terms cuts to school and local authority budgets therefore affect academy budgets. Also, the Government is changing the funding system next year – which will remove any anomalies and lead to many academies having cuts in their funding. Making sure that the school’s needs in these respects are covered would become a whole new aspect of management for the headteacher and governors, magnifying the risk that running the school as a deliverer of education is overshadowed by running the school as a business.

In the appendix we raise some concerns about funding that we believe should make any governing body think again before deciding to pursue academy status. In particular, we are very concerned about how schools would cope in an emergency or unforeseen situation. This could include events such as a fire, a flood, a problem with asbestos,a difficult or complex legal case arising from an accident to a pupil, an allegation against a member of staff or a budget crisis for the school. The National Governors’ Association has stated that “governors expect to be able to turn to local authorities for training and advice, and value the support provided by them.” We are concerned that the Young People’s Learning Agency will not be able to provide such support.

As the union representatives of your staff, we are also concerned about the security of their employment and their terms and conditions in the future. As a local authority maintained, voluntary aided, voluntary controlled or foundation school, your staff know their rates of pay and how they are decided; they know their terms of employment such as days and hours of work; and they know about other important conditions of employment such as sick leave and sick pay, maternity leave and maternity pay. Many of these conditions of services are the result of discussions between organisations representing staff and the local authority. Others come developed from national consultations. It is clear that your staff would not want to lose the certainty that they currently have about these matters. Evidence has shown that academies can struggle to recruit and retain staff who prefer this certainty –you would not wish to see an exodus of experienced staff from your school following conversion.

In local authority maintained schools the local authority has a legal duty to seek to redeploy staff if the school can no longer afford them because of falling rolls, budget crisis, reorganisation,curriculum changes etc. The local authority would have to meet the cost of retraining and of redundancy payments if redundancies were necessary. As an academy, your school would have to meet its own redundancy costs and would not have access to a redeployment scheme. With spending cuts coming up, this is a very real risk. As a single employer, there is a real risk that financial constraints would cause your school to worsen redundancy terms and still be in continuing difficulties because of issues related to meeting these costs.

It is not possible to ‘try out’ being an academy. The school has no option to change its status back again.

For all of these reasons, we do not believe that it would be good for your school to become an academy.

So, why bring this up now, especially when all the consultations at places like Severnvale School are complete.  Well, the U-Turn by Education Secretary – Michael Gove –  over funding arrangements which was supposed to be removed from the LEA and given to the Academy schools has been proven illegal is a huge blow to the funding of Academies.  Also the main Gloucester Academy has also not been able to survive without Government Handouts.   This letter was written to Primary School Governors, but it is just as applicable to every other tier of education.

What happens if the school can not manage on its funding?  What happens when it goes bust? What of the education of our children?

So, a plea to the Chairs and Governors in Kingsway, Quedgeley, Gloucester and everywhere – PLEASE look at the small print – Whilst it might seem a shiny great idea on the surface, Gove does not have a great track record in keeping his promises – PLEASE do not let the children pay the brunt of an ill planned, ill thought out venture.

David M would have given a different speech to Ed M – And?

This is an interesting article because it starts to unravel the various education and business services that local authorities provide to schools. These form part of those back office functions that are perceived (by some) to add little value, relative to front line services.

However, take them away and you end up with overworked teachers and poorer outcomes for children. The same can be applied in the health sector. In my view, the whole principle seems wonderful at first glance but ultimately, it leads to a false economy. Time will tell.