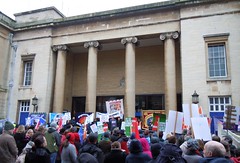 The Gloucester Libraries debacle has been “Called in” by the Liberal Democrats to the scrutiny Committee, and thus an extraordinary scrutiny meeting was called tonight to hear the arguments.  I attended in the public gallery, and what resulted can be described as nothing better than a whipped farce.

In essence, there was a number of elements that had been called into question, from how much legal scrutiny there was, to just how much consideration into the impact of communities there had been.   All the motions were voted on, and almost invariably the Vote was 7-4, with one or two abstention along the way.

There were a number of elements that made this a farce, firstly the County Council is a Tory council.  The Scrutiny Chair is a Tory.  The majority of the Committee is Tory.  So where is the scrutiny?  What is worse, it seemed to be whipped, under the beady eye of the Council Leader, Mark Hawthorne, who wasted no time in trying to set his authority on the Chair.

But, in dealing with this particular issue, a number of issues were highlighted during the proceedings, such as the Cabinet had made its decisions on the Libraries 9 days before the consultation period ended.

That little or no thought has been given to the disabled provision, or the Museum and Libraries act!

And it was summed up by a councillor who expressed his dismay at the way the County Council do scrutiny and a plea that they need to change the way they work.

Many people in the Public Gallery were very disappointed in the process, which as the evening continued, ended up in open laughing at the “votes” and  slow clapping the Tories from the room.

But the biggest failure here is to the residents of Gloucester.  The big Defence from Cllr Noble was that the decision would not be made until the budget meeting on Wednesday, but Wednesday will come and then it will be too late.  The decision could be “called in” again, but for what point?  Our system can not see proper scrutiny when the odds are so tipped in the Cabinets favor and the councillors have been clearly whipped in.  There is a time for Whipping, and that is full council, not Scrutiny.

The Library service has been dealt another blow, Cllr Noble was very clear that no decision had been made, yet their press coverage and released clearly contradict this.  They are hiding behind a thin veil.  They are not doing this for the good of the residents, and they have no plan B or alternatives.  It’s a “take it or leave it” deal, without the “leave it” option.

As an observer it seemed a complete sham, but best quote of the night for me was from the Chair, Cllr Rob Garnham, when he said “there are too many Cons” to which the public, almost to a person, roared “your so right”, which led to a few red faces on the Tory sides.

On the plus side I met a few people who I had only met in the “Twittersphere” and internet including City Councillor Sebastian Field, Jo Anderson and Kay Powell, so at least I got something productive out of it, its always good to put faces to opinions.

The Railway Triangle – Is anything better than nothing?

Government back down on Forest sell off