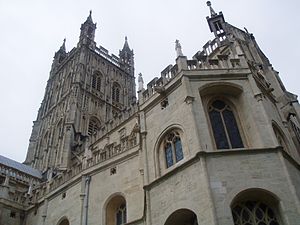 The Boundary Commission hosted an event today in Bristol to cover the Parliamentary Boundary issues and any counter proposals. During this event it because very clear that the Gloucester MP had not actually read the bill and done any impact analysis, or understood the rules he was voting for. If he has he would have realised this problem was going to come up and would have perhaps moved an amendment at the early stage, but no, he did what he does best, and that is exactly what he was told to do by “Big Dave”.

It is now that he is proposing to split Westgate ward, keeping the main buildings (Cathedral, Docks etc.) and losing Hempstead, Alderny Island etc. to the Forest of Dean. This is such a ridiculous suggestion on a number of levels. Firstly, when he voted the bill through, he voted for the minimum change and certainly splitting of electoral wards was a huge no no. This is for good reasons, firstly to split wards and the admin that goes with it is very costly. But, and this is where we get to the absurdity of the proposal, they want to split Westgate for the Parliamentary, but not for City or County. So you would not have a properly split ward, just the Parliamentary line running through it. Imagine the hassle and organisation it will take to organise any sort of local and national election.

It was clear through the agitated actions and aggressive questioning by our MP that the full realisation of his proposals have hit home, that he is pushing to set a national precedent that just cannot be implemented because it would undermine the whole workings of the Boundary Commission. It was also a bit strange that he seemed more concerned about the Tewkesbury Abbey ward moving to the Forest of Dean rather than the those residents in the Westgate Ward that he is trying to cut out.

And what of the Lib Dem proposals? It seems to be a case of they are doing what the Tories tell them, their submission is exactly the same, breaking the same rules and ignoring the same people. Parmjit Dhanda made the very good point that they seem to have forgotten that it should be about the communities involved, not just buildings!

So what is the Labour solution? Ideally, there would be no change as we are not losing any MPs in Gloucestershire they are merely playing a numbers exercise. However in coming up with an alternative and if we had to swallow a bitter pill, the best we could come up with, which keeps in with all the rules is to highlight Hucclecote instead. Ironically, this should be supported by the Tories because it is the suggestion that both Paul James and Mark Hawthorne made at the last boundary review. The reality is though that I think even this is unnecessary in Gloucestershire, we will end up with the same number of MPs, so we should focus on communitites not numbers!

As an update, straight from the rule book, here is the research the Tories and Lib Dems have not done, and why their proposal should fail. The Labour Party have done their research and have shown that it can be done without splitting wards, and therefore it is not appropriate to go down the silly dead end of splitting Westgate.

Lights on Pedal Bikes – Please do the right thing!!!

So what is the Labour solution? Ideally, there would be no change

As I said, we have put together a solution that does fit it with the guidelines. However I hardly think the current situation in Gloucester favours labour, you may not have noticed but it’s a Tory led city and county council and we have a Tory mp….