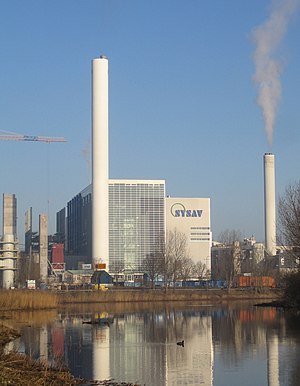 As mentioned in my previous post, there is a bit of a consultation going on at Javelin Park by the last 2 competitors in the ring to provide the “Energy from Waste” facility (that’s an incinerator to you and me).  I went along this afternoon, mainly to have a look at the technology solutions, as well as take the opportunity to talk to the companies about what they had actually been asked to do and what they were going to actually provide.  I think there should be a hearty “well done” to the two companies and their representatives as i thought they did a great job in being polite and courteous while I battered them with questions, and I was also very impressed with their candid attitude.  What was interesting though was some of the answers I got, which show that maybe all we have been led to believe is not all it should be.

On the face of it, both companies will do exactly the same thing, take waste, burn it, use the heat to heat water to run a turbine and generate electricity and create ash.  They will both also be able to provide local heating for free such as housing or something like a swimming pool.  But as there are no houses or public amenities, its like having a Towbar on your car, but no Trailer or caravan, or have a Blueray DVD player, but not being able to afford the right TV (for those not getting the simile, its pointless!)

My line of questions started around the whole process, and I asked the rep to explain the process to me from the point the truck pulled up at the gate which they both did.  They both started with “the bin bags are emptied into this hopper/pit”.  The first big fail.  When Richard Graham MP did a surgery in Quedgeley, he said he was going to encourage the Councils to do waste sorting before incineration.  Either he didn’t or they ignored him because when I asked them to clarify, they had no intention whatsoever of doing so.  They and the council are working on the assumption that they are only burning 30% of all waste as the Council will be recycling 70%.  When I said to one of the companies about the green bin issue in Gloucester, they pursed their lips and said that they hope that improves.

So then I got onto visuals, and they are certainly going to be a presence beside the M5 – One will be 45m high with a stack (Chimney) around 8om and the other 48m with a Stack of 85m.  So in reality quite similar.  It’s not really that surprising because the technology inside takes up a certain amount of space and therefore it will have some height, but what does it mean, just how high is that?  The City Hall on the south bank of the Thames in London is a 45m high building, so that hives a bit of a visual key.

The Height of the Gloucester incinerator - London City Hall

If only the Incinerator would look as cool as the City Hall though I have to say that was maybe one differentiator between the two groups, UBB had a lot more discussion over fitting into the environment and taking into account of the surroundings.  It may have just been an easy board to put up, but it did sound as if they appreciated the locality a bit more.

I am also quite concerned about things like the residual ash and the like.  The UBB did talk about recycling any metal waste that was in the ash, but it was CC who really had all the answers when it came to using the main ash in road building, and the Lime based material used to filter the fumes in cement based products.  They seemed to have thought more about it.

I also asked about how much waste and having to bring it in from outside sources, (such as Bristol) and both groups were insistent that this was a small facility, just to serve Gloucestershire.  In fact, the only person who said that they could look at shipping in waste if they needed to was from the Council!

Some of the more interesting discussions were around the choice of site, it became apparent that while the companies had heard of other sites, they had pretty much been told that Javelin Park was the site to use.  Which is not quite the way that the council would have you hear it.   Also the discussions over emissions, especially in comparison to European standards, and both were well below them.  This implied that it was all OK because of being under a set standard.  But when I asked about local health issues and drew attention to figures for health in other incineration locations, even though they were also were better than the standard.  The thing to remember here is that Official standards does not always make them right.  Thalidomide was an approved morning sickness cure.

So, in weighing both groups up, the technologies seem similar, they have the same outcomes.  One had better literature, but the other seemed to be much more accessible and more “open” in terms of explaining things.   One in my opinion seemed to be a better organisation and more sympathetic to the local area.

However, I still want to have some justification over the original concept.  We have had no disclosure over the reasoning why the PFI was removed, why we have not had a proper consultation.  We could cut down our landfill use by not importing trash from Bristol to dump in Hempstead.  Overall, why are the County Council so sure over their recycling targets when they have no control over the collection and therefore are helpless to manage it.  In my day job I do a lot of engineering/scientific analysis and can appreciate the quality of the technologies that are going to be employed.  If this is truly the best/only/right solution then fair enough, show me the facts and I’m happy.  What I do not like is this abuse of our money with half-hearted consultation and ramming a process through just to satisfy some hidden agenda.

Hypocrisy? Me? Surely not!

[…] Gloucester Incinerator – My thoughts on the final two groups and the process (barrykirby.co.uk) […]

[…] Gloucester Incinerator – My thoughts on the final two groups and the process (barrykirby.co.uk) // MOODTHINGY How does this post make you feel? […]