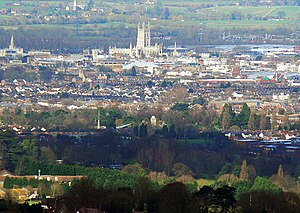 What will this view be like in 2020? - Image via Wikipedia

I attended a workshop/meeting today, hosted by the City Council in GL1.  The idea was that it would give us some feedback about the cuts and the consultation results so far.

There were quite a few people present and this was the first of two sessions that day.  From Barry Leech of the City Neighbourhood partnership, to Ian Mean, Editor in Chief of the Citizen.

After an introduction by Julian Wain, the City Council chief Exec, we found out that we were doing a series of 5 workshops to address the subjects that had come out of consultation.  The subjects were – Crime, Neighbourhood development, environment, Local Business, Economy to name a few.  To be honest, I can’t remember the rest, mainly because there was 5 workshops, each of (strictly by the whistle) 15 minutes.  Each workshop had 2 subjects and therefore we had 7 mins per subject.  For each subject we had to look at what Gloucester did well, where we should be in 10 years time and what we could do to contribute.  Each group had about 10 people in it so really it was a whirlwind tour.

It was really good to have so many personalities in the room and such a variety of input.  however I was quite disappointed in the amount of time given for the workshops, it seemed to be that just as we got into a subject it was cut off.  Also, I was expecting to get a bit of feedback from the council as to the results of the consultation to date, but nothing really came forward.

In the wash-up, there was a lot of talk about the “Big Society” and what it means.  What came clear was a lot of people are not taken in by a new Buzzword for what we have been doing for years, Ian Mean suggested getting the Prime Minister down here to actually tell us.

The next steps is the development of a draft Vision/Plan document and then more consultation.  It is supposed to be all about it being embraced by all the stakeholder groups, because of this, its unclear at the moment just who would actually own it.

I liked the opportunity of so many “players” in the room to talk and learn from each other, and more get togethers like this will be vital to make localism work in Gloucester.