Home Kingsway Kingsway Underpass – The difference between understanding and supporting 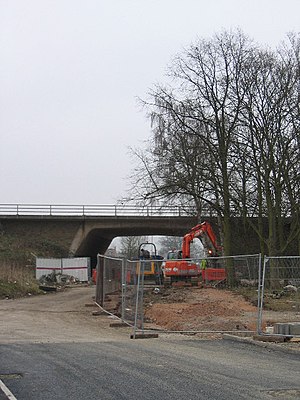 Kingsway has a ridiculous situation where we have a 2 minute route avaliable to get us into the centre of Quedgeley Amenities but because of a City Council Planning decision/restriction, we have to drive over a mile out of our way to get there.  The theory is that the Traffic Modelling that was done showed that the roundabout would not cope with the increased flow of traffic.  Though there were also a lot of objections by local residents in Quedgeley that were taking into account too at the planning stage.

In the first instance there was a bollard which physically stopped people using it, but because it regularly got vandalised there was real issues of emergency services not getting through.  Therefore the next solution was to put a number plate recognition camera which automatically registers and fines people as they drive under the bridge.  This move has hit the headlines as the scale of the issue has come to light, with over a 100 people a day using it in the first week, and when it actually went live there was over 400 fines issued (£60 per fine).

When this was initially discussed, I was adamant that the issues from Llanthony bridge were learned from and that this was not a “cash cow” for the council.  I wanted to ensure that everyone knew about it so people were not caught out and thus there were many signs, notices and flyers put up, leaflets delivered and a number of articles in the press and online.

I have now found the downside of this route, in that people believe that I agree with the underpass being shut.  A letter in the citizen on Wednesday has berated me for not campaigning to have it opened, and that I was not being representative of Kingsway Residents in my stance.

From my own perspective I would like to see the underpass opened, and for it to be a route to use and I think the City Council have really let us down in this issue.  However, it is not a new issue, and it was a condition before the first brick was laid on Kingsway, and therefore we can not claim that it has just “suddenly” happened.  We also have to think about the residents who live in the immediate vicinity of the bridge.  Many moved to properties there in the full understanding that it would not be a through road and I do think that their concerns must be heard too.  Therefore I can not see the underpass opening anytime in the near future.

There is one major contradiction that needs to be highlighted though.  If the main reason the underpass that could not be used was the traffic flow on the exit roundabout, how on earth did Tesco get permission to expand in such a way that would invite greater traffic flow, as well as introduce another (in my opinion dangerous) roundabout a bit further round.

Overseas Aid – Should we be looking after the home front first?

I have to agree with Claire on this. One of the hidden issues here is the anxiety that dangerous driving causes in communities, especially amongst parents and the elderly. No one really can measure that and estimate how much this form of anti social behaviour inhibits people living free and peaceful lives.

Putting the planning issues to one side, we do seem to rely too heavily on our cars. Tesco in Quedgeley is a short walk from much of Kingsway, the mini Tesco in our new village centre will be closer still. In an ideal world, we would have no large supermarkets/car parks and small markets that serve local communities living within walking distance. Sadly, we also live in a society where the motoring lobby is very powerful and speeding is not seen as a social taboo.

The reduction in local services (libraries, bus service etc.) will encourage more motorists to take to the roads at a time when citizens, businesses and governments across the world are being asked/compelled to reduce CO2 emissions. So much for joined up thinking.

In balance, I would favour buses and emergency services only as improving driver behaviour is a more intractable problem that cannot be solved in the short term. I don’t put much stock in the so called cash cow. A child’s life is far more precious (economically and socially) than speed camera revenue.

It is a distraction used by ‘good’ or experienced drivers who like to speed and slow down for cameras, hardly very professional or finessed driving (that also increases fuel consumption at a time of rising petrol prices). By way of an analogy, another popular urban myth is the cigarette duty and the cash cow for HMRC. Tragically, the tax revenue raised here is more than offset by the cost of treating smoking related illnesses. In effect, UK plc makes a loss, which is why we see health services investing in cessation. Debunking a few myths may help to promote greater understanding and make Kingsway a safer and more enjoyable place to live.

Claire, thanks for the clarification – Its appreciated. 😉

Claire, so where is the Planning inspector from and where do they come in the layers of authority?

Am not sure what you mean by “layers” and whether that actually has any bearing as enforcement (of any route designation by any highway authority) is likely to be ‘top down’.