Home Gloucester Local Elections – Vote for the Person or the Party?

Local Elections – Vote for the Person or the Party? 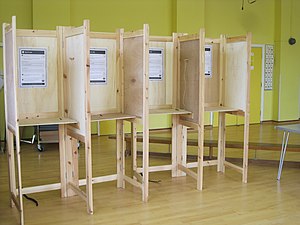 A polling booth in the New Forest for the UK vote change referendum and local government election. (Photo credit: Wikipedia)

With the local elections just a scant few weeks away, the local politicos are on the ground vying for your vote.  Personally I’m not standing this year (Quedgeley isn’t up) but thought it would be worth highlighting a few points for you to think about when it comes to you vote on May 3rd.

Firstly, really look at what your voting for, it’s not a Parliamentary election, it’s for the local City Council.  They have the remit on things like waste collection, green bins, local events, local planning, promotion of the City as well as preservation of it.  So really you are looking to either change what we have, or you want to keep the status quo.

Secondly, look at the person.  There is an argument to be had that you will rarely see your MP , its one person who has a remit of 80-90ooo people  to, however you probably have (on average) 2 councillors for your ward, so there is a much greater chance of seeing them, either if you have a problem, or at community events, or just standing up for you community in general.  Is the candidate someone you can talk to, do you feel confident that they will stick to their word.

That brings me onto my third point, what is in it for the candidate?  What drives them?  Are they just looking for a posh title, or are they wanting to make a difference?  Do they really have your community at heart or do they just want a seat at the big table?

You also have to take into account their Party Affiliiation, but for the local elections, I would say look at the person before the party at this level.   It’s not like they are going to make huge political waves at this level, but it does give you a flavour of what sort of outcome you can expect from their decision-making.  I would suggest that what you don’t need is a Party Drone, but someone who works for the community but has the “flavour” that appeals to you.

Talk to your neighbours, see if their experience of the candidate was the same as yours?  If the candidate is the incumbant, has anyone interacted with them, and did they get a good resolution?  Were they ignored?  Have they done any other community roles and were they any good?

You are going to see leafletting, and posters as well as have people knocking on your door.  Many people don’t like talking, and many people have made up their mind as soon as they see the colour of the rosette they are wearing, but I think this year is important for residents to ensure they have local councillors that they want.  It is these councillors who will be the last line of defence if you want protecting from the government cuts, or they are the last bastion of support if you want to see a different focus of cost saving, or if you like it, then the councillor will be ensuring it gets hammered home.  With the Big Society and Localism, the “powers” at a local level are growing stronger and the responsibility is getting pushed lower.

You have an oppotunity to choose a councillor that is right for you but it is important that you make an informed decision.  These potential representatives are coming to you, so don’t just fob them off with a “”you lot are all the same”  because it’s not true, just because they wear a particular colour, even within a party, there is a breadth of capability and motivation even within the colour.   Take myself as an example, I have been a Labour Candidate, but I’m very centralist in my beliefs, where as some of my fellow candidates have been much more on Left wing that I am.  On specific issues we may come to different decisions.

When they come to call use the opportunity to find out what they will do for you, do they know your area, will they listen to your issues?  If your interested in the Party Policies then find out how they will affect local decision-making?

From my experience of being a candidate there is nothing more frustrating than not been given a chance to put your case.  (Actually that’s a lie, the most frustrating is having your hand bitten by a dog when you put a leaflet through, buts that’s a different story).  That is why I encourage candidates to use as many avenues as possible, IE, Social media and leaflets as well as door knocking.  But I also encourage the voter to use them as well, this person will be representing you for 4 years, surely that is worth 10 minutes of your time to have a quick google of the candidates to see what, if anything, they have done in the past.  Are they on Twitt

er and Facebook (only relevent if you use it as well) if they are then drop them a tweet or message with a question (even if its as simple as “what can you do for me?) and see if they reply.

Local elections are all about people, both you and your potential representative.  Find out about them, make sure they are worth your vote.  Which brings me to my final point, VOTE!  As Paddy McGuinnes says on Take Me Out, “the power is in your hands, look after it well.”  (He also says “let the rubber see the duck” which while funny, is probably not quite as relevent)

I do agree. I always vote for the man locally not the party

In my experience, in my own ward, councillors are Party Drones. Of course, since their aspirations coincide with that of the party, namely that they, candidates for that party, win the poll, it’s not entirely obvious, but whatever side of the agument one is with incineration, say, you can see how party affiliation determines opinion, far more than personal views.

I have agonised over this (well near as dammit), because Barton & Tredworth is such a ‘rotten borough’ when it comes to grubbing for votes, but I’ve edged towards voting for Labour after being told by one resident that Usman Bhaimia does work for residents, and of course does live in the ward. His avowed aversion to ‘political nastiness’, considering the way he campaigns, is something we’ll have to work on. I don’t have a great track record for catching the ear of councillors, but hope springs eternal.