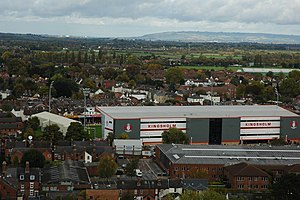 Midday on Saturday saw me turning up to Kingsholm ready to take part in this years Mens Walk, and we could not have asked for a better day.  A 5 mile walk around the city, followed by a Pie, Pint and 2 games of Rugby, especially with such a great home game performance from Gloucester, what more could you want. (Well, for England to have won against Wales, but the less said about that, the better).

This is the second year of the Mens Walk and also my second time too.  I went with Rich and his son Louis, the same team as last year, and we got ourselves registered and were hugely impressed by the number of other blokes who had turned out.  We were starter by Peter Buxton, and trooped off out the players tunnel, round the pitch and out into Gloucester.  The weather was fantastic and a great sense of camaraderie amongst the walkers made this a fun trip.

After the walk, which took in Eastern Avenue (with a quick pit stop at McDonalds), down Metz Way, Trier Way, up Southgate Street, across the Docks, through the Cathedral Grounds and back to Kingsholm, we settled down with the Pie and a pint to let the feet rest a bit before the 6 Nations Game started.  We went outside to watch this ont he big screens.  This was followed by the Gloucester Vs Harlequins game, which was very good indeed.

After that, Amanda came to pick us up and its fair to say I did sleep rather well on Saturday night.

Thanks to all those who Sponsored me, I really appreciate it and here is looking forward to next year already.

So much for Car Free living….