Home Politics Overseas Aid – Should we be looking after the home front first?

Overseas Aid – Should we be looking after the home front first? 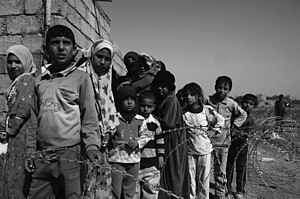 There is a lot of talk at the moment about if we should be spending money on aid to overseas countries.  On the one hand, there are many people suffering int he world, and therefore as one of the leading countries in the world, we should be doing the moral thing and helping people who are in a much worse situation than we are.  However on the other hand, we have many people in the UK who are slipping into poverty and homelessness, and therefore why are we giving money to other governments and organisations when we have the problems right on our doorstep?  Should we be prioritising in this age of austerity?

In the first instance, what are we talking about £7.8 BILLION that we give away to countries such as Ethiopia, Bangladesh, Nigeria, the Democratic Republic of Congo and Pakistan.  India  is also on the list, receiving £295m.

And I think that is the rub.  We are cutting back on what we call our vital services, such as the NHS and education systems.  We are making people redundant right left and centre and have a pretty stagnant economy, and we are giving £295,000,000.00 to a country that is one of the most developing in the world right now with an economy growing at 10%!

We as a Country are being made to fend for ourselves under the veil of “Big Society” with Community Offers and miserly bribes to run our own libraries, youth services, so why can’t other countries come under the same package, especially when we know their governments have considerable funds, they just don’t use it on their people.  Why is the Government we not saying to these countries what they are saying to our communities – Use it or lose it?  If we don;t man our own library, then we obviously don;t need it, if they don;t use our tax money for what we want them to use it for, should we be stopping the flow?

But then we have to remember that money isn’t everything, and that we have to have a sense of morality and humanity.  Yes India has a great growth rate,  but it also has some of the poorest communities in the world.  Can we just stand aside and say “sorry we want our community library” and not at least try to help?  That £7.8bn is less that 1% of our GDP, so in the grand scheme of things it is peanuts.

You could argue that if we stopped overseas aid, until we have sorted out or own economy so it is thriving again, we could then restart aid, and perhaps be able to give more at that time.

But in the meantime, people who rely on that aid on a day-to-day basis will suffer, and suffer badly.

I think there is no easy answer to this, and we can really tie ourselves in knots over it.  One part of me says we should be looking inward in the first instance, but then those are real lives that we are playing with, easy to dismiss if you switch the TV off, but it’s no movie, its real life and they don’t have the luxury of the off switch. But just as they don’t have an off switch, neither do those in Poverty and Homeless in our cities and towns.

Quedgeley to be broken up under Gloucester County Council Boundary Review?

Charity should begin at home, and I fear that much of our aid budget is for political ambitions rather than a high moral stand

Even in a recession, 0.7% of GDP for a wealthy industrialised nation is affordable and if redeployed at home, would not lift all British citizens out of poverty. As Eddie infers, there are also economic and political interests which could be regarded as moral or amoral, depending how you see the world.

Yes, charity starts at home, but this does not mean that charity ends at home. Rather, it provides us with the moral resolve to help others. We should continue to give support to those NGO’s and charities that play an active part in relieving suffering for the world’s poorest and most vulnerable citizens. Our own society, big or otherwise, will be the healthier for it, as compassion breeds compassion.

Good post Baz. As always in life (what a grand way to start a sentence!), there are two sides to the argument, which you put well. I cannot personally condone stopping foreign aid to some of the poorest countries on earth.

These countries face desperate situations and the people there have absolutely no safety nets of any kind. Just on moral grounds, it would be inexcusable.

Of course funding has to be considered but given our society is partly based on the exploitation of some of the poorest people on earth (both historically and in the present), and we therefore partly owe our economic prosperity to them, I feel we have something of an obligation to meet.

Does that make it right, or something we should be continuing? No.

We should be doing everything we can to support some of the poorest and desperate people on earth.

This is a matter for one’s conscience. The actions and motives of governments past or present cannot relieve human suffering. Each year, 8.1 million children die before they reach five years of age. I, for one, find that unacceptable.

The big picture re. India and other countries can mask poverty. In per capita terms, India receives comparatively little, relative to other donor countries. And poverty exists in wealthy countries like US and UK because of social inequality. It is strange that Child Poverty in the UK has been increasing whilst the economy was growing.

Child poverty increased under Labour. That is definite. It isnt just the posturing I object to, but also the waste and the corruption.

Musevini has spent £30 million of the 70 million we gave in aid on a luxury jet for example. Let’s get our own house in order

You’re dammed right we need to get our house in order. Banks are “too big to fail” but Southern Cross and other Care providers, evidently are not that big or important. Not difficult to see how child poverty increased in a country riddled with social inequality. Meanwhile, whilst establishment politicians are busy giving us the impression that they are getting their/our house in order, children continue to starve…

James, it was ever thus. No change except for the worst in the last decade or more. Charity should always start at home

Eddie, this is starting to turn into one of those idealist/pragmatist discussions which I am used to having with my father in law! The pragmatist tells us that “life isn’t fair” and the idealist tells him how it “should” be. All we need now is a few activists to make the world a better place…

James we shall have to agree to disagree. I think we need more pragmatists to make the world a better place