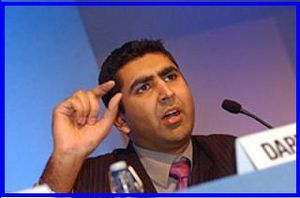 Its always interesting to read a story in the press about yourself, espcially to see the difference between what you think you said and what has actually come accross, but imagine reading a story telling everybody that your about to up-sticks and move elsewhere.  That was how Parmjit Dhanda found himself this morning on reading the Citizen.

There are a number of by-elections coming up, and Parmjit has been linked with the seat in Leicester, but while he was asked if he would consider it, he very resolutely turned it down, however the press seem to have ignored this small fact and have been telling everybody he is off.

I must admit, when I saw the story, my heart sank as I have a lot of respect for Parmjit, I do see him as a Mentor figure as well as a friend and when I need advice on what to do in a given situation or even just a chat about progress in general then he has always been a great source of information and good sense.  I could not blame him for considering other seats, he was a parliamentarian for a long while, and Leicester would be a much safer seat than Gloucester, and the opportunity to “have a crack” must have been tempting.

However,  it would seem not.  I’m very pleased to say that the whole story about him leaving is nonsense.  He has lived in Gloucester for over 10 years, his two children were born here and he considers Gloucester as his home.  I admire the fact that when he was asked if he would consider standing, his response was no.  No If’s or But’s, he is determined to win back his seat, even if it means waiting a while for the next election.

Richard Graham must have felt tremendously relieved at reading the paper this morning, but I’d love to be a fly on the wall when he finds out the story is wrong!!!

Doorstep feedback – Labour is the only alternative in Quedgeley

Has the Gloucester MP researched his charity exploit?

Fair one on that Leicester Article, it has been edited since this morning, I should have “snapped” it. And the Citizen article is on page 3 and not online, hence why I have not linked to it.

I think (and its my opinon, not fact) that looking at how Parmjit came to Gloucester and where he goes from here are two different things. Yes he came to Gloucester to contest the seat, and he was wanting to be a Politician, but 10 years later, he has a family home in Gloucester with 2 children and his wife also works around here, so that gives him a very different outlook on life.

I guess it depends on how you define home-grown as well, take myself as an example, I consider myself as a local and Gloucetser as my home, but I have not lived here as long as Parmjit (I think he has been here 1 or 2 years longer than me).

One could say the same about Ian Mean’s origins as your own, Barry. However, neither of you came to Gloucester/shire tooting your love of the city, and your wish to serve. You yourself grew ties to your community long before deciding you could contribute something politically. Dhanda would have announced his ‘commitment’ to any likely constituency that would have him (indeed, you’ve said he encouraged you to step forward, but he would have his own reasons for doing that).

And although his wife may work here, Parmjit has set up a business in London. You’ve said you wouldn’t blame him for considering other seats, and cynic that I am, I detect a bit of laying the ground for a decamp to the metropolis, or at least some place a bit easier to commute from. We’ll see what we see, of course…

Your comment at 3:12 pm seems to be a response to a comment that isn’t there anymore, Barry. Was it mine? I shouldn’t think it was abusive…

Joe, someone had posted saying that the article did not say what I said, and I have no idea why its not there now? If it was abusive I wouldn’t have replied or “answered it” if I was going to delete it, but Im also nto int he habit of deleting posts just becuase I get abused. It doesn’t seem like that long ago, but it was March, its fair to say this year is flying by!!!