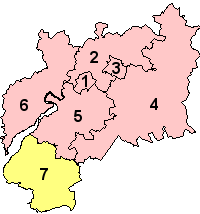 I wrote a few weeks ago about the reduction in County councillors in Gloucestershire.  The Conservative idea that all 2 member wards should be reduced to 1 member.

Well, it seems the Boundary Commission has agreed to the Tory demands and reduce the number of councillors by TEN!

Mark Hawthorne, County Council Leader, said “I am pleased the Commission has agreed with Conservative arguments to cut the number of councillors.  I could not look our staff who are facing redundancy in the face if councillors weren’t sharing the pain too.”

That just proves to me that he just doesn’t get democracy!  Its not the councillors themselves who will feel the pain of this, its the constituents they represent, and the fact they will not be able to get as much time with their elected representative, if at all!  Having pointed out in my last post that it would mean looking after 16000 people, I did think that it may not make much difference as I have never seen Vic Rice since he was elected, Jackie Hall seems to cover the patch.

This move will save the Tax Payer £88k. But what will it cost the tax payer in terms of accountability and scrutiny?

As much as it pains me to say it, I agree with Jeremy Hilton when he says “I’m worried about the community work and the scrutiny of policies and challenging the cabinet in the way they administer the county council services.  It might be difficult for that to happen effectively with reduced numbers.”

I think he is right – I think this is a bad move – What price democracy?

” What price democracy? ”
I’m afraid it does have one Barry. Losing 10 councillors will not imo make the council less effective, or less democratic.

Yes, Democracy has a price, I don’t dispute that, I was more getting at how much we are willing to pay/sacrifice for it.

So how many councillors do you think we could lose if you think 10 doesn’t matter, 20, 30? What is the golden number?

Though I think its better to look at it in another way, just how many constituants can a County Councillor represent effectivly? (And that is different from what is the national average) This should drive the number of councillors.

I think given the number of redundancies that have happened over this harsh period and the amount that virtually every business both public and private have had to tighten their belts, this move actually heartens me that the local governments are trying to do something about their spend.

Yes I realise it’s going to mean more work for some people, but surely with more sensible investment in technology and cutting out a lot of the unnecessary red-tape a happy medium can be reached between spend and save?

This is massively over simplifying I realise as I’ve no idea what goes into role of county councillor.

Personally I’ve had to step up my game due to redundancies, and 6 months ago the idea of managing the number of accounts I have now was ludicrous, yet here I am doing it and succeeding.

This time last year I would probably have agreed with you, however having had my “education” over this year has really made me realise the value of the Councillor. They provide our representation of what the Council should be doing. I think its important to recognise the difference between the Councillors and the Council itself. In essence the councillors provide the direction, but the Council do the work. Therefore it is right that the council itself becomes leaner and more efficient, but if you reduce the number of councillors then the level of scruitiny goes down and the quality of the decision making decreases.

I don’t think many, if any, Councillors are actually in it for the money, they get around £8k a year to cover their time, but when you look at what they do and the hours they put in, that is easily well below minimum wage.

With the cuts to local government, it is (IMHO) a time when we need the councillors to ensure that the cuts are fair and not just taking advantage of the position fo idealogical gains.

Totally get what you’re saying, maybe there’s a wider education issue here, all I see is a council that doesn’t appear to do a lot other than fleece me for council tax on a monthly basis dropping an occasional leaflet through my door which I’ve never once read and scream about lack of funding while organising meeting after meeting after meeting – and no this isn’t a conservative thing, it’s been like that since time immemorial, hence why I’m kinda looking forward to a change!

I think your right, the drive to get value for money is no bad thing, and Im all for it. The problem at the moment of course is that all this reduction will not reduce our council tax levels. 🙁

I think your absoluatally right about the education thing, its not until recently that I have begun to understand the different remits of the Parish, City and County councils in our area.