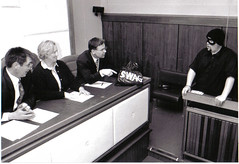 One of the things I have been doing for a few years is be a Magistrate in Gloucestershire.  However, that “hobby” is ending today as, after much deep thought, I have handed in my resignation.

The main reason for resigning is that trying to fit a developing career, which sees me travel a lot in the week, and sitting in court where cancellations were not uncommon, and early finishes were meaning that I was not sitting as much as I needed to in order to remain competent to do justice (no pun intended) to those coming in front of the bench, that includes victims, witnesses as well as defendants.

Being a magistrate has really opened my eyes to seeing society as it is.  I have seen the worst of people, but also those people who have done bad, but turned their lives around.  I have had the massive frustration of solicitors losing their files, and the terrifying moment of sitting in court, by myself, to grant or decline the ability for service companies to turn off electricity etc.  I have also seen the true effect of drugs on the lives of families, the hopelessness of the drink driver being sent down again for drink driving, and taken more driving licences that I can remember.

I have read with impotent anger, the claims against magistrates that we do not know our communities, that we don’t know the real world, that we live in ivory towers.  Hearing politicians stand up in Westminster and claim we do not know our jobs when a celebrity is treated the same as everyone else (you know who you are 🙂 ).

The side that many don’t see is the mix of personalities that make up the Bench.  How such a wide range of people, drawn together with a single view of serving the community forms the backbone of the justice system.  How 3 people, who may have not worked together before can listen to evidence, and then debate intensely each point and work hard to ensure everyone has their say.  In fact it is a point worth noting, that while the public hear only from the chair of the bench, every magistrate has an equal say, and everyone works hard to ensure that everyone got a say.  I may have been lucky, but everyone I worked with was keen to ensure I gave my opinion and allowed it not to be unbiased.

So it is with great regret that I have taken the decision I have, I only hope that one day in the next few years I can reapply to the bench and serve the community again.  All I ask is that you remember this, all magistrates are volunteers and dispense justice according to the sentencing guidelines without Fear or Favour, affection or ill-will.  It may sound a bit pompous, but is at the forefront of the mind of every JP.

City Vision and Plan – Quedgeley Tesco Today – Another opportunity to have your say!

I guess its time to brace myself for heckling….