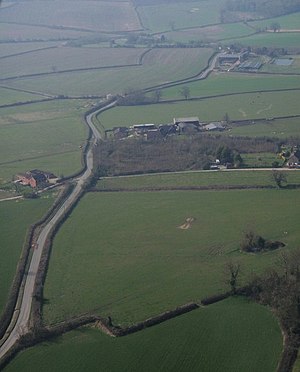 English: Grove End from the air The road from Sellars Bridge to Hardwicke winds past Grove End Wood, with Grove End Farm on the left. (Photo credit: Wikipedia)

Today we heard that, despite residents opposition, multiple Parish Councils opposition and the Stroud MPs opposition, the development of Sellars Farm has been approved on appeal.  This brings up 2 questions, firstly what is the point in local council planning decisions when they are just overturned, and secondly what happened to the governments much acclaimed Localism putting power into the hands of local residents when such an opposed development is pushed through by the Government.

Quite frankly it shows just what a mockery the Localism agenda really is and that the Government don’t really give 2 hoots about what we, the residents, actually think.

This development is a bad idea on many fronts.  This is building on the Stroud/Gloucester border where the infrastructure is already beyond breaking point.  There are already not enough facilities, doctors places and the shopping amenities are scaled for the current population.  The road network to Sellars farm is also nowhere near adequate, seeing an increase in traffic on Pound Lane is an accident waiting to happen.

This just proves the point about how Localism is a nice buzzword for the Government to use (remember Big Society), but when you get down to it, it’s another load of crap for the local groups and organisations to take on-board and sort out with no funding and no support.

Another U Turn, or simply a diversion?