Home Gloucester The Railway Triangle – Is anything better than nothing?

The Railway Triangle – Is anything better than nothing? 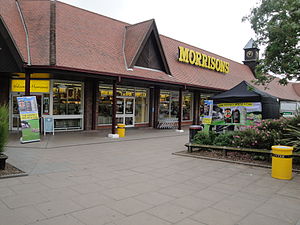 Coming to the Railway Triangle? - Image via Wikipedia

Plans have been reveled that show the new proposal of the development for the railway triangle.  It is proposed that we have another supermarket.  Wow, yet another supermarket.  I am very uninspired by this approach, I think it sells short on what Gloucester should be aspiring to and that residents deserve an approach that looks to business and local economy long-term growth.

But there is the argument that at least it is something.  There has been many proposals, including the relocation of Kingsholm stadium and an Ikea as well as a better railway station.  So if there is someone (Morrisons) willing to do something then should we just be grateful?

The Railway Triangle has been an eyesore for 20 years, though I do think Richard Grahams view that its  “like ethnically cleansed villages in former Yugoslavia” is a bit out-of-order, it grossly belittles the trauma that country has gone through.  But it’s not exactly pretty either.  So should we just be thankful and let anything happen to it?

Personally, I do not think we should.  I am proud of living in Gloucester and the recent thought that has gone into modernisation and development.  Do we really need more supermarkets?  With a handful of huge Tescos, a Morrisons, 2 Sainsburies, will another Morrisons add anything?

We will get another 4-600 jobs, which would be a good thing but it will take money out of the local economy not put anything in because it’s just retail.   While there is a lot of call for a new railway station, which I have a lot of sympathy for, we do have to acknowledge that if the network provider isn’t interested (and it certainly seems that way) then it’s not going to happen.  Given its location, what about a good quality business centre/Park? Something like that  would have a betetr chance of bringing revenue in and boost local economy!  The Government wants to make more of Small And Medium Enterprises (SMEs) so lets facilitate them with good quality premises within reach of the Town Centre.

So, what to do?  In these “austere” times, then maybe we have to accept this if we want it right now.  But, it has been like this for 20 years, so why not just wait.  Normally I love to see action, but we have been promised that all these cuts will give us prosperity in a couple of years, so rather than rush into something (the main driver being that it will not cost the Government anything) why not wait for these really hard times to recover and then look at doing something which will grow the city in the long-term?

Someone commented in one of the first stories in the Citizen that this still has to go through planning at the City Council.  I can’t see it being submitted before May, maybe there will be a new crew in charge of the council by then?

I believe that a lot has been invested in Gloucester in recent years, and the Kings Quarter is in keeping with this, lets not start going second best now.  If we have to wait a while longer, then its a small price to pay for the long term gain!

It would be could if something could be done at no cost to the rates and tax payers. I would like to see a new rail/bus interface and a commercial park. The one would help integrate transport, and the other generate wealth. I am not in favour of another supermarket, not does the idea of a road clogging IKEA near the town centre fill me with optimism. Something should be done, it just does not NEED to be done 🙂

Reply
Tweets that mention The Railway Triangle – Is anything better than nothing? « The murmurings of Barry Kirby -- Topsy.com February 11, 2011 - 12:58 pm

[…] This post was mentioned on Twitter by James Hoddy, Barry Kirby. Barry Kirby said: The Railway Triangle – Is anything better than nothing? http://wp.me/pyDqM-xl […]