Home Gloucester To AV or not to AV, that is the question

To AV or not to AV, that is the question 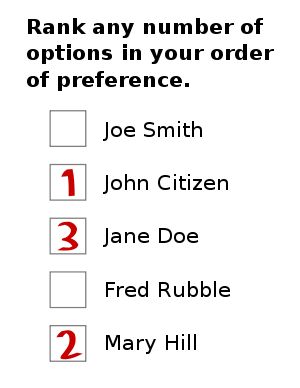 What an AV card would look like - Image via Wikipedia

Or that will be the question on May 5th, when we go to the Polls to vote in the local elections next year.  Along side voting for who you would like as your local representatives, you will also be asked to vote on if we should stay on our current voting system, called First Past the Post, or do we move to an Alternative Vote system.

So what is the difference.  Well the First Past the Post (FPTP) system relies on everybody voting for their favourite candidate and the candidate with the most votes wins.  Simple enough

So, why?  Whats the point in the change?  Well, the current argument is that candidates get elected from maybe only 30/40% of the electorate on the FPTP system and that AV elects candidates with more than 50%. The Pro-AV group claim that this gives the candidate a greater mandate.

Do I think this is a good idea, well, No I don’t. On a number of grounds.  Firstly, using AV does not give you a greater mandate, as it’s not everybodys favourite candidate, its people’s second or third or fourth favourite.  Also it is still only measuring those people who Vote, and I think we have bigger problems with people not voting rather than the voting system itself.

Look at the Gloucester result (as much as it pains me),

Richard Graham won with 40% of the vote with Parmjit getting 35%.  But only 64% of the population turned out and voted anyway.  Even if this this had been rolled up with AV and someone had won with over 50%, that would still have been only 32% of the voting population.  Hardly a mandate in the way the Pro-AV folks want.

Also, when it comes to the count, how complicated is it going to be to sort out and do in an open and honest fashion.  It will take forever.  Having been a Counting Agent this year, then it was hard enough to keep track as it was.

I wanted to try and draw a comparison to the Labour Leadership vote, but that is not as easy, because of the different value of every bodies vote (MPs, Members, unions etc) but more fundamentally I think the emphasis was different.  People were voting for who they thought would be best to lead, with all members having roughly the same core values.  The Parliamentary elections are much more adversarial in nature.

So no, unless someone can show me some really good reasons to vote for AV, I will not be voting for it.

I think we will be much better off getting people out to vote as a priority.  I would even like to consider making it a legal requirement to vote, even if you spoil the ballot paper, or have a “none of the above”.  But this would have to be coupled with a simple and secure way of voting.  Maybe more postal voting and/or internet voting.

OFSTED Standards – Should do what they say on the tin

“I think we will be much better off getting people out to vote as a priority. I would even like to consider making it a legal requirement to vote, even if you spoil the ballot paper, or have a “none of the above””

I have been advocating that for years, so I agree 100%

Your objection, Barry, presupposes that with FPTP, people vote for their ‘favourite’ candidate, when, as with ‘best’ in my last comment, it’s not so clear-cut. Tactical voting is a fact of life, and I was very candid with my view that Parmjit Dhanda should not be re-elected. That doesn’t mean I’m as bitter and intractable as some might think about him standing again. Your pleas to the effect that ‘he’s not like that when he’s with me’ are taken onboard, and if he manages not to behave like some of his potential constituents have less right to an opinion, and a response, than others, I might warm to him again, like I was doing before the physical intimidation at his surgery. But at the time, I not only felt strongly enough not to vote for him, but also to not allow him to win through my inaction. That is, after all, what all the parties were telling voters they thought might notionally vote for them, that failing to vote might let the ‘other one’ in. So my vote went to my least un-favourite candidate, and it turned out fine for me, failing anyone getting up the energy to try and deselect Graham.

AV recognises the fact that voters rarely have a ‘favourite’. If anyone does, there’s nothing stopping him or her from selecting one name only. People complain, as I recall that AV tends to lead to coalition governments, but people always complain about something. On Tom Harris’ blog, someone called ‘Nicky’ complained that we didn’t vote for a coalition government, but that’s what we got. I pointed out that we don’t have the option of voting for any stripe of government, red, yellow, green or blue, just the person who will represent us in parliament, but she had no answer to that.

The old line that ‘whoever you vote for, the politicians get in’ is as good a guide as any. As would be ‘the party that legislates for compulsory voting will lose the following election’. 64% wasn’t a bad turn-out, compared to some. How important that 36% is really depends on how you think they will cast their vote. There was a scene in Radio 4’s ‘Clare In The Community’ where uber-PC social worker Clare Barker (Sally Phillips) is going from door to door encouraging people to vote. She puts up a spirited argument for the importance of asserting one’s democratic right, and a chavvy young woman who has shown little interest responds; ‘I don’t like the immigrants. Which party doesn’t like the immigrants?’. Clare immediately assures her that there are probably lots of great programmes on telly that day, and she should probably stay in… 🙂

I think you validate my point in that AV is no better than FPTP, it is just different, from a voters perspective.

My main issue is that without better turnout, AV does not give any more of a mandate than FPTP, which is supposed to be the point.

64% turn out isn;t bad in comparison, but on the whole, yes it is. It says a lot about just how many people don’t really care, and can’t be bothered to go and vote, when it is one of the fundemental building blocks of society!

David Blunkett made a good point on the Daily Politics show today. With AV you count all the votes & if no one gets 50% you then only count the second votes of the nutters & wierdos (not his words!) to get to 50%.

On your point about a long count – what’s the hurry? I’ve worked on counts into the early hours but I’ve never understood why it’s done this way. They’ve campaigned for weeks for a government that will last years, why does the count have to be done that night? Some places leave it to the next day & they don’t seem to come to any harm.

Richard – Ive nothing against the long count (I was there until 6am before it was announced), it is more the procedure that I think would get confusing and difficult. For the first round it would be easy, but then the subequent rounds would be more complicated to keep “open” and accountable. And a Recount would almost be inevitable.