Tough on crime – erm well toughish, sort of, not! 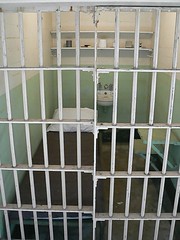 This will become a rarity - Image by Tim Pearce, Los Gatos via Flickr

The Justice Secretary presented the Governments plans for what is effectively the abolition of the Justice system yesterday.

Considering all the rhetoric before the election about being hard on crime, what was presented was nothing like what was hoped for.

Pleading guilty will now get you HALF off your sentence, rather than a third which is a blatant bribe to push people to plead guilty rather than go through the system.  I think this is not a great move, there was already worries about defendants pleading guilty, even if they are innocent, in the thought that they might as well get the shorter sentence, to move to half, will make that worse.

We were promised a stronger permanent stance on knives, but that has now been ignored.

More people will be “rehabilitated” rather than going to prison, though it has been shown that the Probation service can only do so much.  Firstly the Probation service (or whatever they will be called) needs the resources and facilities to make it work, and secondly, more importantly, the subject has to Want to change, if they don;t, then they won’t!

It seems that the justice system is now not about keeping the public safe and upholding justice, it is more about just acknowledging crime but ignoring it, for headlines.

Sadiq Khan (Shadow justice secretary) said the proposals were a “bluff on crime and a bluff on the causes of crime” and were really about reducing the prison population to cut costs.

Don’t forget, we are all in this together!

Do Cuts Need To Go So Deep? (via Moreland Labour Party)

Student Fees – An Education time bomb and a missed oppotunity