Home Politics Another U Turn, or simply a diversion?

Another U Turn, or simply a diversion? 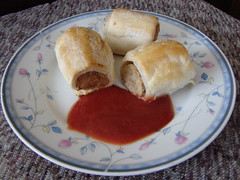 The #PastyTax appeal that had people flocking to local shops and buying warm sausage rolls and pasties seems to have won as the Government announces that the 20% tax on these goods announced in the budget is not going to be implemented.  Also the Static Caravan Tax is not going in at the full 20% but dropped to 5%.  A great victory for the public, as the government admit the U-turn is down to public furore.  Or is it?  Could it be the sacrificial lamb that diverts attention to the havoc being heaped on the NHS, or smoothing over the Millionaire tax cut?  I fear that this victory will be hollow as the full service cuts are implemented.

Lets face it, it was an easy topic to campaign on, just get every MP in their local shop, queuing up for the delicious lunch item, and the blunders by Cameron, claiming to have eaten his Pasty from a  shop that closed years previously

really just fell nicely into the mix.  But the reality is this, yes we have saved 20p on the corned beef slice, but under all this gesticulating about the “U-Turn Government” and general incompetence, they have nicely diverted the issues away from their economic failings, the killing of the NHS and the less said about the schools the better.

So my message is this, well done we have saved the humble Sausage Roll, but we can not get excited about it, there is too much to do, lets get on with it before this shambolic Government get us deeper and deeper into recession.

Leave Schooling until age 7, they will be better for it!