Home Gloucester What does Gloucester need to grow? Thinking outside the box?

What does Gloucester need to grow? Thinking outside the box? 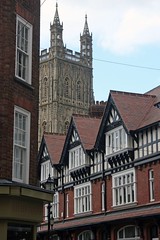 At the Gloucester Vision event last week we were exploring where Gloucester should be in 10 years time.  Yesterday I visited @Bristol with my family and it was walking around the Millenium square and seeing some of the other bits that it hit me about just how blinkered I was being.  Take @Bristol itself, it is a fantastic place to take the family of all ages and learn about various things like science and nature, but in a fun way that is engaging and hands on.  It makes the most of the local influences at the city, such as Aardman animation, Airbus etc.  Given what heritage and influence we have in Gloucester, such as a strong aeronautical history, the Roman roots, our docks etc.  Given the problems we have had with funding for our more traditional museums such as the Waterways museum and the Folk Museum, I really think there could be something done to pool these together and create a really great place that given our background and diversity, it could easily be brilliant.

I visited Telford for the NCT AGM last year and while the mums were doing their serious bit, I was looking after the kids, and we went to the Telford Town Park.  What made this special for me was that it has been put together in such a way that the different ages had a different scale of things to do and were segregated but in such a way that it is natural and parents can keep an eye easily.  Also the variety of things being distributed around the park means that it was a nice place to walk around too, with easy stop offs to play.  I think we have a really good start for something like this in Gloucester Park, but more could be done to add to it, and also link more of what we have already in a safe and enduring way. I think the basic steps of this could be done for minimal investment.

In my opinion, a blight on Gloucester is Kings Square.  Recently we have had a number of half-hearted attempts to do something with it, but needs some serious attention.  Going back to the millenium Square in Bristol, that is a great looking space with active water, lighting, integrated sculpture and the BBC big screen.  In Carlisle, in the Lanes Shopping Centre, there is some Brass Otters in the centre, which Kids love sitting on and touching something very simple but interactive.  When you consider that Kings Square is the first thing people see coming out of the Bus and Train Centre, its not the best first impression in the world.

In business terms, we are so well placed for national business, yet we are overlooked so much.  Our links to Bristol, Swindon and the North by road and London by Rail and good.  It is cheaper to live in Gloucester and we do have space to do things here.  However I do not think we as a city market ourselves tot he people who could invest here.  I do think we need to look at our Public Transport networks to be a real contender, such as being on the other rail line, and ensuring our bus network really works for commuting.

But all this requires cash and investment, so its a slightly chicken and egg situation, so this is where the Vision needs to identity our steps forward and we need to draw everyone in.  We also need inspiration, looking at what other City’s, towns and villages have done that are a success and also what has not worked so well and LEARN from it, great improvements do not necessarily need to be whiz-bang expensive, just thinking in a different way.

What do you think?  What have you seen that would work well and how could we implement the idea in a way that would suit Gloucester?

A great blog Barry. Frankly the city council have a lot to answer for. They have been useless, and for the last few years they have been obsessed with the docks, to the detriment of the main city centre.

They also seem to delight in ignoring local business. The Westgate Quarter is a good example. We are doing great things to promote Westgate St, but the council wont even join at the vast cost of £45.00, and dont seem interested in what we are trying to do.

Reply
Tweets that mention What does Gloucester need to grow? Thinking outside the box? « The murmurings of Barry Kirby -- Topsy.com January 15, 2011 - 12:23 pm

[…] This post was mentioned on Twitter by Eddie Eldridge. Eddie Eldridge said: RT @Baz_k: What does Gloucester need to grow? Thinking outside the box?: http://wp.me/pyDqM-sw […]

Thanks Eddie. Iin your experience, what can the Council do to help? You have just moved your business, and have stayed within Gloucester, was it a no brainer to stay, if not, what were your Pro’s and Con’s?

I think the Docks has been a good start, but the same level of thought needs to grow over the City, encompassing the good work in the likes of Westgate and make people feel like there is a plan/strategy and are working together.

I wanted my business in Gloucester. It is my home town.
They could start by stopping treating motorists as undesirables that are just there to keep the council coffers topped up. My offices come with car parking. Without that my expenses would be upped by £10.00 a day. That’s ludicrous.

In common with governments they seem to think a small business is a factory with 100 employees. Gloucester is full of small traders that are ignored by the council, the majority of which have under 10 employees. That is where the growth is.

All these quangos should go. Marketing Gloucester, GURCH etc are very expensive ways to generate growth, and I think they have all failed us.

The city centre is in dire need of help.

Did you see the tweet that Winstons Ices sent me, the idea behind the City Business awards, I have been thinking about that and think its something that would be a really effective mechanism to bring all businesses together, small and large. But building on the community aspect, I think a Business and Community Awards would be brilliant. The idea that its not only business success but how the business has impacted, complemented, supported the community would be recognised. Do you think the small businesses, would buy into such a thing? I would have to find a sponsor and the like, but as a concept, what do you think?

My fear is that we do rely on Tourism and retail a lot in Gloucester when looking at bringing in new business. I think we have to look back to our roots a bit and get more Science and Engineering back.

Excellent blog. I am a strong supporter of Gloucester and very keen to see the most made of our great, historic city. I think the work at the docks and Quays is great, but we have to be careful not to bury the history and heritage too deeply beneath the commercial. Having said that, it is only by making regeneration projects commercially viable that they will be successful.

A major problem in all the regeneration ideas is a strong and vocal cynicism from various interest groups and serial moaners who oppose everything and create inertia; at some point someone is going to have to have the courage to do something whiles accepting that you can’t please everybody. King’s Square is a case in point.

Good points Darrell
Barry a Business and Community Award seems a good idea. I have noticed that the Gloucester hero awards always go to the public sector. I dont have large amounts of money, but I’d be willing to help

Good blog. What Gloucester needs is simply a City Council that has eyes to see and a heart that really cares about its own City.

Gloucester has so much to offer in the way of Roman history, the Cathedral and precincts and the Victorian docks. But these alone are not enough. Gloucester city centre is in a dire state – investment and imagination needed to get the spenders back to the City instead of Cheltenham!

Eddie, I was planning on asking to get together sometime int he next couple of weeks. Have sounded out a couple of other people on the idea and I think it could have legs. Its my first week back in the office so am just trying to get everything sorted out, but if your avaliabel for a chat then I would appreciate it.

I’m always available for something like this, and I’m keen to be involved. Drop me an email when you have a date and time. Let’s get Gloucester buzzing again.

Gloucester is not very welcoming to the motorist, if that issue was addressed more people would visit! Yes you can come here by bus/coach or train, but what do you see when you do??? Kings Square! and OK you may want to visit Gloucester to go to the Quays, but how is that achieved if you arrive at Gloucester Central Station, or the bus station? To my knowledge there’s no shuttle service to make the mile or so journey to the Quays, so your only option is to walk through what is descending into somewhat of a ghetto, and that’s if you’re able to walk!
The motorist is faced with a minimum £2 per hour parking to visit a £1 shop, and those that do somehow make it to the Quays in their cars are again hit with high parking charges, and woe betide they don’t get it right first time on the way out, they get stung for £60 fine for turning down the wrong road their satnav says is the way out!
As a pure movement study, why doesn’t Gloucester take the radical step of lifting all parking charges for say 6 months and see if the City fills up with people and their money, at least people would feel they could look around our city without having to worry about getting a fine every time they do otherwise visit, or even have a Free after Three parking scheme.
This would bring in passing trade and travelers who would in turn spend their hard earned money in this fair City, and at the same time put money in the purse for improvements to such eyesores as Kings Square.

[…] other week, I was very critical of Kings Square, and it seems that people agreed with me.  The new site will apparently get new […]